Coca-Cola Company feels pressure as the overall soda drink category is in decline. At the moment Americans drink about 167 liter of soda per year. This is a drop from about 201 liter in 1998.

At the same time there is a growing pressure to fight obesity. Even so that New York City tried to put a size limit on sugar soda drinks served in the city.
It seems though, that it is not just the sugar soda category that is in decline, it is the diet soda category as well.

To turn the wheel Coca-Cola Company started running an advertisement to defend the use of artificial sweeteners. 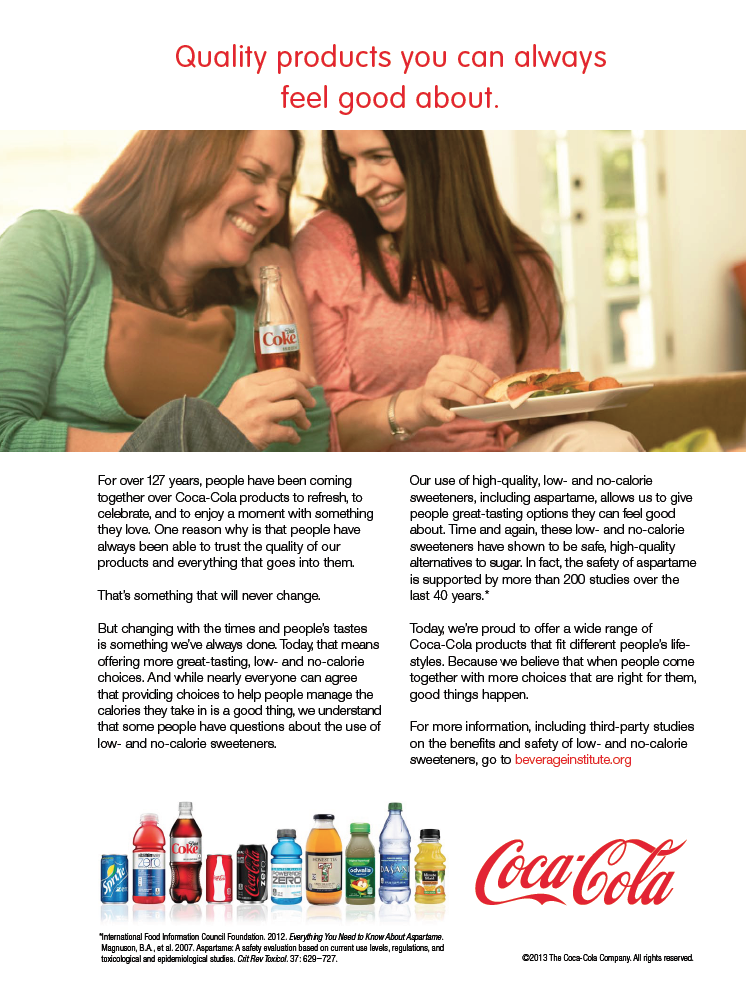 The advertisement has the following headline “Quality products you can always feel good about” and then goes on saying “Our use of high-quality, low- and no-calorie sweeteners, including aspartame, allows us to give people great-tasting options they can feel good about”.

Why would Coca-Cola Company defend the use of artificial sweeteners while there is clearly a trend towards natural?

In the US the growth of organic food and beverages has grown from $1 billion in 1990 to $26.7 billion in 2010. The global alternative medicine sector is expected to reach close to $115 billion by 2015. This is all fuelled by a trend towards herbal and nature-based products.

Coca-Cola Company should see this trend as an opportunity and not fight it. After all, when consumers see an advertisement defending ingredients in products it can be interpreted as coming from somebody trying to ‘prove them wrong’. Especially since the perceived honesty and ethics standards of advertising practitioners are very low. In the US they are just above the bottom two: members of congress and car salespeople.

Instead, Coca-Cola Company should ride the trend and grasp the opportunities now before somebody else will.

First, Coca-Cola Company can position Coca-Cola as the number one brand in All Natural Cola: a Cola truly made of 100% natural ingredients, no chemicals, nothing, just natural.

Second, Coca-Cola Company should consider introducing the natural Stevia sweetener in Cola products. It recently started doing that in some countries with Sprite.

The tough question to answer is: will it keep using sugar in its normal Coca-Cola and use Stevia only in the diet/light variants or will it go the full way and kill the diet/light products all together?

Either way, the soda business is up for a change, a change towards becoming more natural.