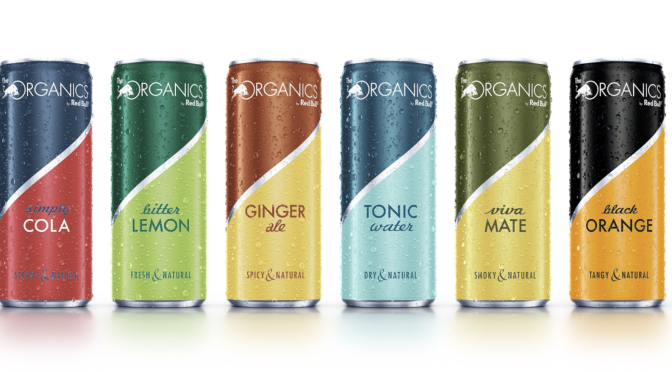 Red Bull is the best-known energy drink globally. In 2019 Red Bull sold a stunning 7.9 billion cans. In a search for growth markets, the Red Bull company found the market for all-natural organic sodas. ‘ORGANICS by Red Bull’ stands for everything Red Bull is not: all-natural.

The brand has organized itself around the Energy Drinks category by connecting itself with high-energy sports, like Formula 1 and Football clubs. The brand is engaged in events like the Red Bull Stratos, where the Austrian skydiver Felix Baumgartner performed a free fall from approximately 39 kilometers / 24 miles above the Earth. Red Bull gives you wings.

In a search for growth markets, the Red Bull company found the market for natural products. In 2008 Red Bull introduced to several countries an all-natural Cola containing just natural flavoring and caffeine. The issue is not the category or product but the name. Red Bull Cola is Red Bull and Red Bull = Energy Drinks that are anything but all-natural. Red Bull Cola did not go well. In late 2011 Red Bull decided to only sell Cola in Austria and Germany with limited availability outside these core markets.

Once a company has identified a growth market, it will try to find a way to take the opportunity, even more, when the current business is going well. Red Bull decided to take another chance by introducing the new label ‘ORGANICS by Red Bull’ and expanding the all-natural range of sodas.

ORGANICS by Red Bull stands for everything Red Bull is not:

ORGANICS by Red Bull are made with ingredients from natural sources and are certified organic in accordance with the USDA National Organic Program.

ORGANICS by Red Bull do not contain artificial flavors, colors, preservatives, GMOs, or other artificial ingredients. The end result is four distinct, great-tasting, and refreshing organic sodas made for your enjoyment.

It is clear that the perception problem remains:

A: The new ORGANICS by Red Bull products are not energy drinks; they are lightly carbonated, organic soft drinks with a distinctive taste.

Unfortunately, the faith of ORGANICS by Red Bull will be similar to the fate of Red Bull Cola. In the mind of consumers, Red Bull = Energy Drinks. Nothing else. It is clear that Red Bull GmbH wants to succeed in the all-natural organic soda category. Success and growth are possible, but the What (Organic sodas) requires association with a different brand name and company name – removing all connections to Red Bull or Red Bull GmbH.

This article is from the book Win With What – the first category-led growth book for anyone who wants their business to thrive and survive. 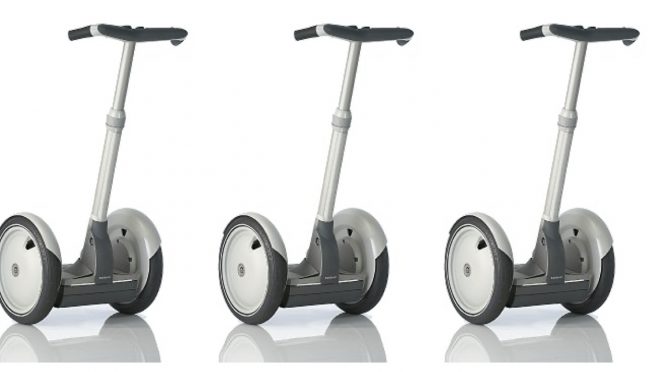 Segway is a brand that failed to take a position and communicate clearly the What of the brand.

According to Wikipedia, Segway is ‘a two-wheeled, self-balancing personal transporter’ .  The problem is apparent: it is not possible to relate Segway to anything we know. Until a brand can be related to something people know, the brand keeps drifting in the brain – trying to find a category to ground itself.

Below is the hompage from March 2002. Segway is welcoming visitors to ” the evolution in mobility” without explaining What the  product is. 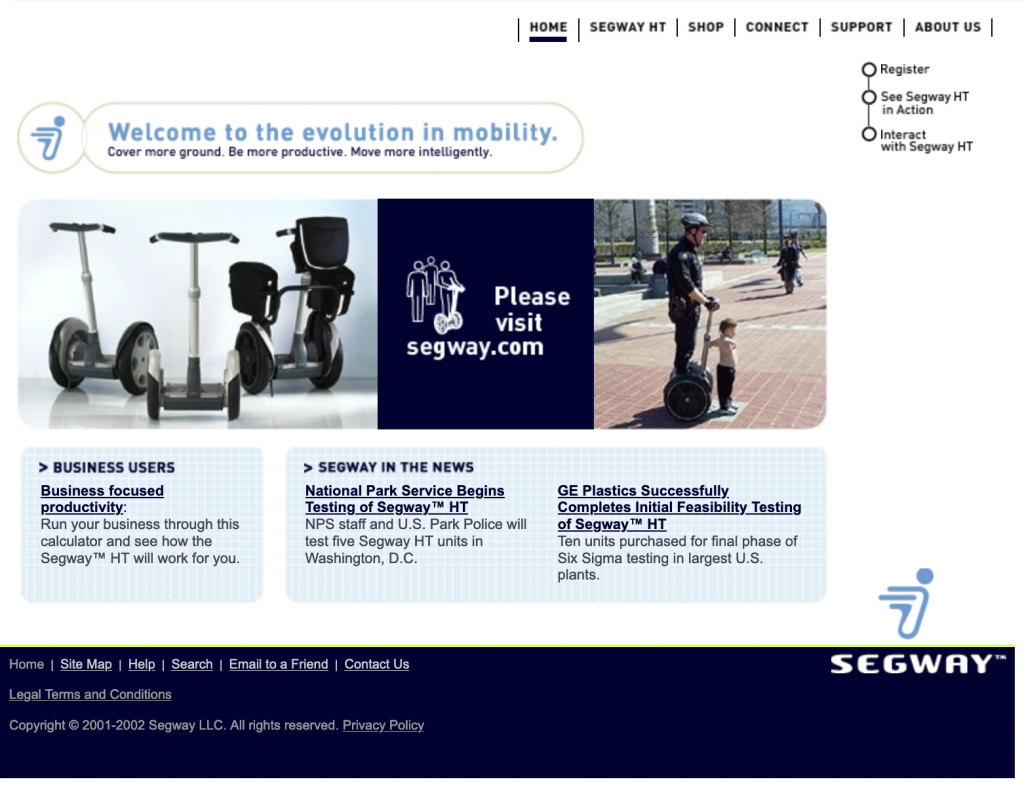 When diving into the “Segway HT” section the focus is on communication what the product does “Human Transporter” and the benefits “that functions like an extension of you”.  Also on this page it is still unclear what the Segway exactly is. Human Transporter comes close, but nobody would say “hey, can you get my human transporter?” 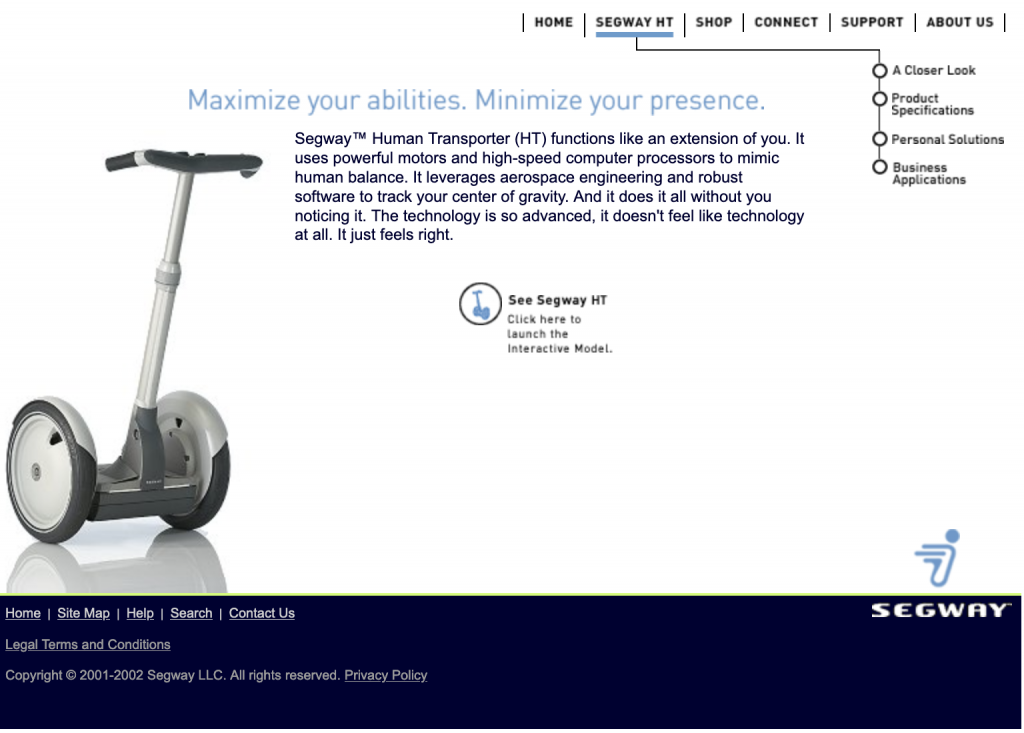 After almost 20 years of trying to convince people to buy a Segway, the company decided in June 2020 to stop making the product. FastCompany wrote, ‘Exclusive: Segway, the most hyped invention since the Macintosh, ends production’.

The expectations at launch were enormous :

‘Its inventor, Dean Kamen, famously predicted in a 2001 Time magazine interview that the Segway ‘will be to the car what the car was to the horse and buggy.’ In the same story, venture capitalist John Doerr predicted the company would be the fastest ever to reach $1 billion in sales.’

What Segway could have done is to stay closer to what people already knew and were familiar with at the time of launch. Explore a variation of the scooter category, promote the What and create a need by showing how people benefit from the new category and with that, the Segway.

This article is  from the book Win With What – the first category-led growth book for anyone who wants their business to thrive and survive. 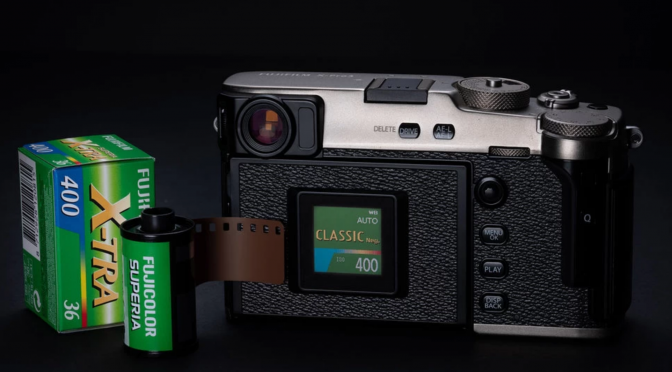 Fujifilm – a personal brand favorite of mine –  recently launched a new product line of cameras seen as Sony copy cats. Is that a good or a bad thing? While I realize not all of my readers are digital camera photography enthusiasts, the lessons in this article are applicable to any industry.

In his brilliant book Innovating Out of Crisis: How Fujifilm Survived (and Thrived) As Its Core Business Was Vanishing, Shigetaka Komori, the CEO who brought Fujifilm back from the brink explains how he engineered the transformative organizational innovation and product diversification of Fujifilm. It really is an amazing story.

This result of this mission can be found in the design of the Digital Imaging products of Fujifilm. Fujifilm understood there are a couple of ingredients to a valuable imaging brand: lens, sensor, processor *and* connecting to the heritage of photography.

In the case of Fujifilm, this translated itself to the creation of cameras with a  distinct vintage look, with the same dials and buttons and the original Fujifilm. And very important, simulations of original Fujifilm analog films are built-in the camera.

The result: a huge fanbase of Fujifilm camera enthusiasts combined with a distinct positioning. Fujifilm Is the only “film” brand that made -without any doubt- the transition to digital!

But something happens to every focused brand: the need to expand or extend. In the case of Fujifilm, they decided to copycat their biggest competitor: Sony.

And with it, Fujifilm launches a new “S” product line, the first product being the S10. Gone is the retro look, gone are the dedicated buttons, gone is that vintage photography feeling Fuji brand advocates love so much.

The Fujifilm site “Fujirumors” calls it exactly what it is The Vintage Departure.  And that is not a good thing.

Of course, Fujifilm will attract some new buyers, but while doing so it loses in being the distinct photography brand. In other words, all the carefully build up brand equity will get a hit.

And, perhaps easy to forget, but if buyers would have wanted a Sony, they would have purchased a Sony to start with. Nobody likes to have the copy, it gives the impression you would not be able to get the real thing.

The same would be for Sony. If Sony would make cameras looking like Fujifilm it might attract of course some people, but those who really go for the Fuji look, feel and operations will come to Fujifilm.

My prediction is that the new Fujifilm S line will be one of short term gain and a long term pain. The better move would have been to invest in new and innovative ways to stick to the core and preserve, sustain, and expand the culture of photography.