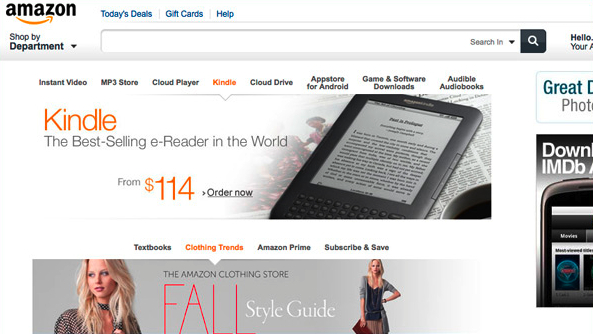 The other day when visiting Amazon.com I got a surprise: a new home page!  I guess Amazon is testing and therefore spreading the new home page in the wild with some customers.

The new home page shows the new direction of Amazon. In fact it is a long departure from the Amazon that we all know so well. You know,  the company that sells physical goods, “Earth’s Biggest Retailer“ and has a well earned number one position.

Not so any more. Today Amazon reinvents themselves as a digital retailer. What a really bad idea.  I wrote earlier about Amazon and their line extension move to digital. There were clear signs that Amazon might fall for the line extension trap.

Let take a look at the new home page:

Now take a close look at the categories:

Hang on a minute? Where are:

Clearly, in the “new” Amazon these are not as important anymore. It is now all about digital.

Now, Amazon wants to “expand” the business and moving into digital. In other words moving from a category in which it is number one to a category it will need to compete really hard against established brands like  iTunes, Spotify, Pandora, Skydrive and many more…

The big question for me is: what are the guys at Amazon HQ’s thinking? Why dilute the meaning of the Amazon brand by entering in the digital space? You did it right with Kindle (you did not call it the Amazon reader) and MyHabit  (you did not call it Amazon Fashion Goldbox) and you should have done exactly the same with digital.

Keep your brand where it is established, especially when it is number one in a category and create a new brand for digital, that is what Amazon should have done.

Back in the days the promise of Amazon was “Earth’s biggest bookstore”. How easy to believe! Millions of books at a good price with a brand named after another earth’s biggest. 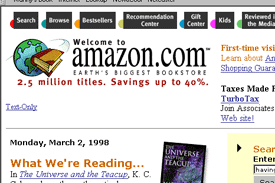 Then Amazon moved on from just books to CDs/DVDs/Games. In my view all still very logic and Amazon executed the right strategy to stay “Earth’s Biggest” in these categories. How? By being The Biggest.

It did not stop there, Amazon expanded further, according to their website “today, Amazon offers everything from books and electronics to tennis rackets and diamond jewelry.” Still, this enormous expansion works. When living in New York City we “amazoned” pretty much everything. Amazon became “Earth’s Biggest Retailer“. This positioning was supported with help of “Amazon Prime”: free 2 day shipping for a yearly fixed fee that tremendously helped taking away the two headaches of internet shopping: delivery fees and delivery time.

At the moment Amazon has expanded even further. This time however the expansion goes beyond the Retail category. This expansion is where future problems for Amazon will come in.

The Amazon.com shopping experience is now split in “Digital” and “Physical”. In other words: the line extension split is made very explicit to consumers. Why will this not work in the long run?

Firstly, Amazon has expanded the brand from retail to digital media consumption. As we know expanding brands in new categories include a risk: consumers can get confused with your current position. Why risk it? Fast forward a couple of years and think about what consumers would answer to the question “What is Amazon in one word?”: is it web shopping, cloud storage, a sort of Netflix or still the best place to buy products online?

Secondly, this move endangers Amazons current positioning of Earths Biggest in physical goods, a position they should simply not give up!  There is plenty of competition that has a very reduced scope and focus, such as The Book Depository. Book Depository sells well… books (and only books) but differentiates with free worldwide shipping. Since we live in Finland it has become my number one go to book site. So Amazon will  need to improve in all the sub categories of the products they are selling to stay Earths Biggest.

Thirdly, in “Digital” goods Amazon is far from being Earths Biggest, and even if Amazon would be in terms of numbers they are not in consumer’s mind. In this space there is lots of existing and established competition.

The option I would have recommended to Amazon is to strongly consider launching a new brand, let’s say Everest. Amazon did it right with Kindle. Calling the current Kindle product the “Amazon reader” would have been a disaster. Think about it… would a consumer go to a shop to buy an Amazon? No, they wouldn’t, but they do go to the shop for a Kindle. And it pretty successful: Kindle is now synonymous with e-books/ digital reading.

Everest would on one hand be an part of Amazon, just like how Kindle and the Kindle Store are today. On the other hand on Everest.com would attract new customers who not necessarily would go to Amazon.com for digital media consumption. The “only” thing Amazon would need to make sure is that Everest.com would create a consumer need based on something new, not serving consumers the same or very similar stuff they can get with the established players.

So, what has happened in terms of my consumer behavior over the last month… I simply go to Amazon for pretty much everything and bypass any other online retailer. Baby stuff? Should I go to Babies  R Us? Probably before Amazon Prime I would have but hey… with “free” shipping at Amazon why would I pay anything to Toys R Us for shipping? Camera stuff? Previously I would go to Adorama or B&H Photo Video, now I go directly to Amazon. Computer stuff? Previously Newegg, now Amazon…  and so on.

Amazon plays this smart. On top of me switching from other online retailers to Amazon I also see an uptake in stuff that I order from Amazon… because its so easy, no need to pay for delivery and the package will be at my home in two days… Why bother with anything else?

Lessons: ask consumers to pay a relatively small fee for something that could limit their online purchases (benefit retailer) and take away the biggest frustration for consumers when purchasing online (delivery fee and delivery times). By applying the benefit to as many products in Amazon’s catalogue Amazon virtually has a common differentiator against vertically (focussed) online retailers. On top of Amazon’s sharp pricing it is one way to differentiate competition. 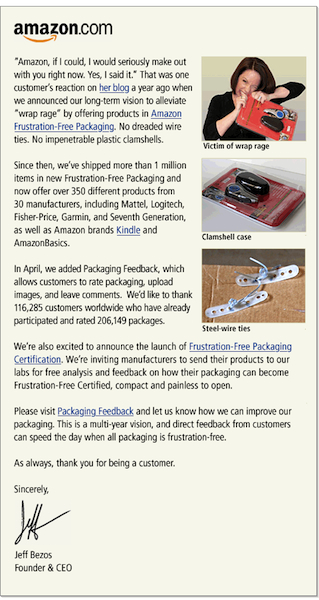 Today Amazon.com visitors are greeted with a message Jeff Bezos on the success of an Amazon program called “Frustration Free Packaging”.

Well from the bottom of my heart I can say Thank You for reducing wrap rage since 2008!

Only last week I still experienced a frustrating package. I had bought a ScanDisk Memory Card for my DSLR. It took me ages to take the plastics off! The process included scissors and some Dutch swear words… So frustrating!

So, I am happy to read that Amazon takes its mission statement serious:

to be earth’s most customer centric company; to build a place where people can come to find and discover anything they might want to buy online.

And it makes to total sense… frustration free packaging  it is a great differentiator. With the volumes Amazon is making they can actually influence behavior of suppliers and manufactures.

This website uses cookies to improve your experience while you navigate through the website. Out of these, the cookies that are categorized as necessary are stored on your browser as they are essential for the working of basic functionalities of the website. We also use third-party cookies that help us analyze and understand how you use this website. These cookies will be stored in your browser only with your consent. You also have the option to opt-out of these cookies. But opting out of some of these cookies may affect your browsing experience.
Necessary Always Enabled

Performance cookies are used to understand and analyze the key performance indexes of the website which helps in delivering a better user experience for the visitors.

Analytical cookies are used to understand how visitors interact with the website. These cookies help provide information on metrics the number of visitors, bounce rate, traffic source, etc.

Advertisement cookies are used to provide visitors with relevant ads and marketing campaigns. These cookies track visitors across websites and collect information to provide customized ads.

Other uncategorized cookies are those that are being analyzed and have not been classified into a category as yet.